It's A Dog's Life
By Anthony 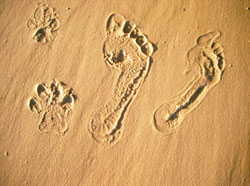 Many people ask if the animals we love and lose move on to join us in the spirit world. I answer with a resounding YES, they most definitely do! I have had many different animals make their presence felt during readings. Goats, cats and I even had a parrot come through at one time.

Most of the time these animals are acknowledged by a human spirit energy as being with them as a validation to the sitter. It is rare that the animal themselves impress me with their thoughts, but it has happened.

By far, the animals that come through the most during a sitting are dogs. As in life, these extraordinary animals seem to communicate directly with me. This is a short follow up story of a reading I gave to a lady in the USA.

As I started to open up to the energies at this reading with Lynzi (as I will call her here), I began to have a strong impression that it was to be a very unique connection, but a very special one. I started to feel the presence of a medium sized dog, a little smaller than a Labrador, coming through to me. This itself was not striking. What was interesting, however, is the dog was on his own, with no one else with him to help facilitate the connection. He started by telling me in a very clear fashion that he had been put to sleep. He also gave me the R initial in his name and showed me a most remarkable picture of him dressed up for Christmas, complete with the reindeer horns. Immediately Lynzi connected with what I was seeing and told me it was Roa, her Lab cross, who she had to have put to sleep some months before.

This animal was an incredible communicator! Better than many human souls I have encountered over the years. He gave some very specific information for me to pass on to Lynzi. As his energy was leaving me after only a short ten minutes or so (which is typical of animal communication - short and to the point) he gave me some information that, to me, was confusing. He started to show me his teeth (strangely enough) and told me to say hello to what he termed as the “little pain” and again showed me his teeth. I was very confused by this information, but it was abundantly clear to Lynzi.

Lynzi explained to me that the little pain was another dog, much smaller than Roa, who has lost most of its teeth. Everytime the two dogs were given food that was difficult to handle, Roa would chew up the food and the little one would race in and relieve him of it. This developed into a game between the two animals. Lynzi always thought that Roa made a song and dance of the fact that the little one stole the food, but secretly allowed it to happen. It's as if Roa knew the little dog had no teeth to chew with. Both Lynzi and I found this to have been a remarkable connection and one that she would never forget, I don’t think I will either.

This was a remarkable connection, one that highlights the fact that animals move on to the spirit realm along with our souls, and can also validate themselves to a medium. I find dogs fascinating in life and, even more so, when they communicate from beyond. I also find it comforting that my own pets will be waiting for me when I shuffle off of this mortal coil.
Powered by