The old Fremantle Asylum .... Now an Art Centre and Museum
“You’re nuts!” “Rather you than me!” “Aren’t you scared?”   My friends – they’re so supportive of my adventures that creep beyond the ordinary and dip a toe into the extraordinary (or eccentric as some would argue). But I must admit I gulped and felt a twinge of fear when I read the following paragraph from Richard Davis’s book, “The Ghost Guide to Australia”:The Fremantle Museum and Art Centre was built with convict labour in 1861, as an asylum for the criminally insane. It now ranks as probably the best-know haunted building in Western Australia.

For those of you who don’t know, ABC Television contacted Anthony and invited him to take part in a series called “How the Quest was Won”. The dare was for the ABC television crew to spend an entire night locked up in Western Australia’s most haunted building, the Fremantle Museum and Arts Centre, with one of Australia’s leading Mediums. Anthony asked for a ‘female’ volunteer to join him. My hand immediately shot up. Or was it everyone took a step back and left me standing front and centre?

So going back to the criminally insane part, I realised my knowledge of the ‘Asylum’s’ history only dated back to the early 1900s. Just after the turn of the century the building was used to accommodate homeless women. So the thought of anguished, ghostly women floating around the corridors didn’t bother me. (Reputedly at least three ghosts walk the corridors day and night.) What did bother me was the thought of the energy from a criminally insane male spirit being blasted at me like a cannon ball fired down the corridor! The only thing that kept my bravery intact was the knowledge that if such a thing did happen, I could hide behind Anthony.

Yes… there were rapid temperature changes in various rooms. Yes… there were charges of energy – some manifesting in orbs. Yes… there was one set of stairs that had all of us instantly grasping for the balustrade for fear of being pushed. Rob, the cameraman, even experienced the cold ghostly touch of a little girl spirit whom had presented to Anthony. But nothing like the haunted terror seen in Hollywood movies took place. Instead the experience was more profound than all those paranormal events combined. Anthony, the ABC crew and I became an audience to an event steeped in injustice, exploitation and enforced silence.

Just after midnight, the security guard kindly permitted us to leave the first floor and wander into the grounds. Pitch black and guided only by torch light, Anthony led us over to what was once the ‘padded cell’ area. Within seconds of standing near the towering limestone walls all of us sensed a chill. Anthony became aware of three young women in spirit. It is their story that touched something deep within our hearts.

The three girls were sisters. They were the daughters of someone prominent in the community at that time. One sister had a mental health issue. The other two did not. Perceived shame surrounded the three sisters. The exact nature of that ‘shame’ was unclear to Anthony. “I feel the shame is political rather than immoral,” said Anthony. “I feel the girls were locked away out of sight to protect a political career rather than for the benefits of the girls’ health.”

Anthony was quiet for a while then said, “The three sisters died here. They were only teenagers.” But before they died they were exploited sexually Anthony continued. “I feel money changed hands and these girls were used for sexual favours,” said Anthony.

As Anthony was being told parts of the sister’s life incarcerated behind the foreboding gothic limestone walls of the Asylum, he felt the urge to move to different areas within the grounds. Afterwards we learned near to where the ‘padded cell’ is today, the exterior boundary wall had a hole in it. Through that hole the bodies of the dead were passed and loaded on to horse drawn cart – the three sisters included. And the place where the sisters said they were ‘exploited’ is reported to be where the bathhouses once stood.

The three sisters were only in their late teens. Sadly, their life was cut short - not by an act of God, but by an act of so called ‘humanity’. Even if Anthony had been able to capture their names it is unlikely official records of their ‘committal’ exist. A silence befell us all as we thought about the injustice served to ‘our’ three sisters.  My only hope was that through the scant details Anthony was able to share that night that the three sisters found peace. Finally someone had heard their story. The truth had been spoken. The injustice of their incarceration had been spoken.

At 5 a.m., tired and exhausted, we packed up and prepared to leave. Walking out to the car both Anthony and I turned to look back on the grounds being slowly bathed in the light of dawn. In a couple of hours we both knew hordes of tourists and visitors would be sitting under the trees talking, eating their sandwiches and chasing off the odd seagull. I imaged the three sisters sitting with the laughing public and enjoying the sunshine. Finally they were free. Their story had been told.

It didn’t surprise me that as a group we didn’t encounter the many ‘reported’ ghosts. Anthony had achieved much more. He had set free three teenage girls who had been wrongfully imprisoned in a time when society had no compassion for mental health, nor recognition or patience for teenage spirit. 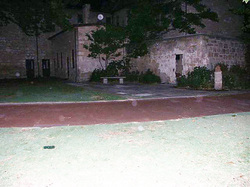 This picture depicts at least 3 orbs and was taken during communications with the three sisters. Anthony was prompted by his spirit guide to take the picture at that precise moment. Another picture taken just seconds after had no orbs at all.
Powered by