The Ghost Ships of Truk Lagoon

I have dived and gone to heaven.” Those were my first thoughts every time I rolled backwards off the boat and descended into the calm, tepid, tropical blue waters of Truk Lagoon. Yet, as I dropped down into a watery graveyard littered with sunken ships, World War II relics and hidden dangers, I couldn’t help think that 60 years ago, my heavenly decent was a Japanese sailor’s plunge into hell.

February 17 and 18, 1944, the peaceful tropical skies over Truk Lagoon exploded. Task Force 58 - a group of nine American Navy aircraft carriers and related cruisers, destroyers and submarines launched an attack on the Japanese forces stationed at Truk Lagoon. Their mission (Operation Hailstone) was to cripple the Japanese naval forces; partly in retaliation for the bombing of Pearl Harbor.

For two days, the American bombers created a hailstorm. Bombs and torpedoes rained down onto the ground and into the waters of Truk Lagoon. More than 400 Japanese planes were wiped out and some 50 to 60 ships were reported sunk, creating what is today referred to as the "Ghost Fleet of Truk Lagoon" – a wreck diver’s heaven.

The ‘Ghost Fleet of Truk Lagoon’ – once proud Japanese warships, are unprepared wrecks. Located in depths varying from the surface to in excess of 60 metres, the wrecks lie in state, just as they were when they were bombed. Their broken hulls, strewn cargo, and twisted sheets of metal still tell a chilling tale despite glorious corals and a plethora of marine life attempting to paint a vivid and colourful story on a canvass of war.
As we descended inside and penetrated away from the life giving sunlight, we entered a completely different world. In the darker depths, the insides of the ships became ghostly reminders of just how much operation Hailstone caught the once proud Japanese warships, their Captain’s and crew by surprise. 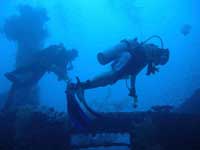 Sankisan Maru: Julie Sullivan descends into dark depths of a hold.
Picture credit: David Bell © 2005.
Diving “the Ghost Ships of Truk Lagoon” was nothing like I have ever experienced. There was no comparison between diving the ghost ships’ and walking through a cemetery after midnight or being locked up in a haunted building for the night. 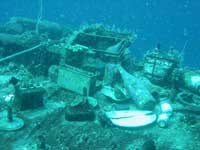 Shinko Maru: Bottles, plates, cutlery and other utensils lay strewn on the decks.
Picture credit: David Bell © 2005.
Feeling a sense of a ghostly presence underwater, as you might on land, is difficult. Underwater, not all five senses are available. Of those that are, they’re significantly altered. Most of what a diver hears is his or her own breathing. Due to wearing a mask, a diver only has 75% of his or her field of vision. So glimpses of ‘things’ moving in peripheral vision don’t happen like they do on land. The sense of touch is masked by gloves and a wet suit. So something ‘cold’ touching a diver, as reported by many spiritual encounters on land, is less likely. Sight is dependent on the clarity of the water (visibility) and light penetration from the surface. At Truk Lagoon, visibility was extremely good, even at depths of 63 metres. Inside the wrecks, however, it was a different story. They were dark with little ambient light. During wreck penetration, I asked my spirit guides to keep us all safe. The ships were unprepared wrecks – a potential hazard to any diver. Plus, the torpedos, mines, bombs and anti aircraft shells were all still live! Only if the wrecks had groaned, or if dark shapes had passed me by without explanation (that is a large fish, another diver or a shark) would have I felt frightened. I had a strong sense I was being protected all the time while I was diving. My spirit guides were with me.

As I finned into torpedo holes, wormed my way into engine rooms and floated up into bridges, then dropped into holds to investigate machinery, armaments and munitions, the spirit of those departed also echoed in my mind. It was with reverence I swam over the remains of Japanese sailors. In my mind I said a quiet prayer for those lost at war and for peace the world so desperately seeks.

Truk Lagoon is part of the Caroline Islands in the heart of Micronesia (5 hours flying time north of Cairns, Australia and north east of Papua New Guinea).
Powered by